I never saw a gun on a guide ,I do not know if they are permitted or not.  I only saw bear spray come out once but never used. And this was when the Salmon was brought in to be cleaned and a bear with cubs happened to be there already.

The mother asked, bear body language style, to have a go at the Salmon.  The humans said no. She was insistant she needed the salmon, that it was salmon season, and she needed to feed three cubs. Humans said no. She stomped her foot (this bear language is like an unruley child insistant on getting their way and leads to next bad thing). Humans took the water hose cleaning fish and sprayed , albiet gently, her feet,baely a little splashing, twice and that was enough to make her give up turn and take her cubs off to graze sedges.  It was amazingly simple, correct actions at the right time, quiet, kept it from turning into a problem. 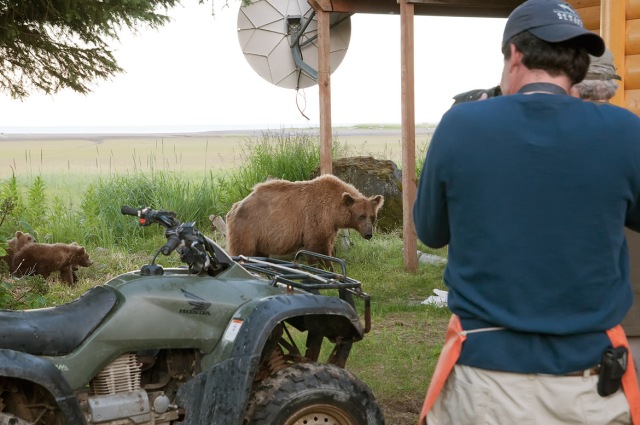 They seem to understand simple words like “no” “bear” etc.  Never yelled, no clapping, no fast movements, nothing terribly aggresive. Stand your position.  Be firm.   Body language the key and understanding that language from both bear and humans.

Bears are NOT pets !   Again the Lake Clark coastal area is unique, I don’t recomend hanging with griz anywhere else.  Being with a trained guide a must.